Getting Some Juice from the Data Chart 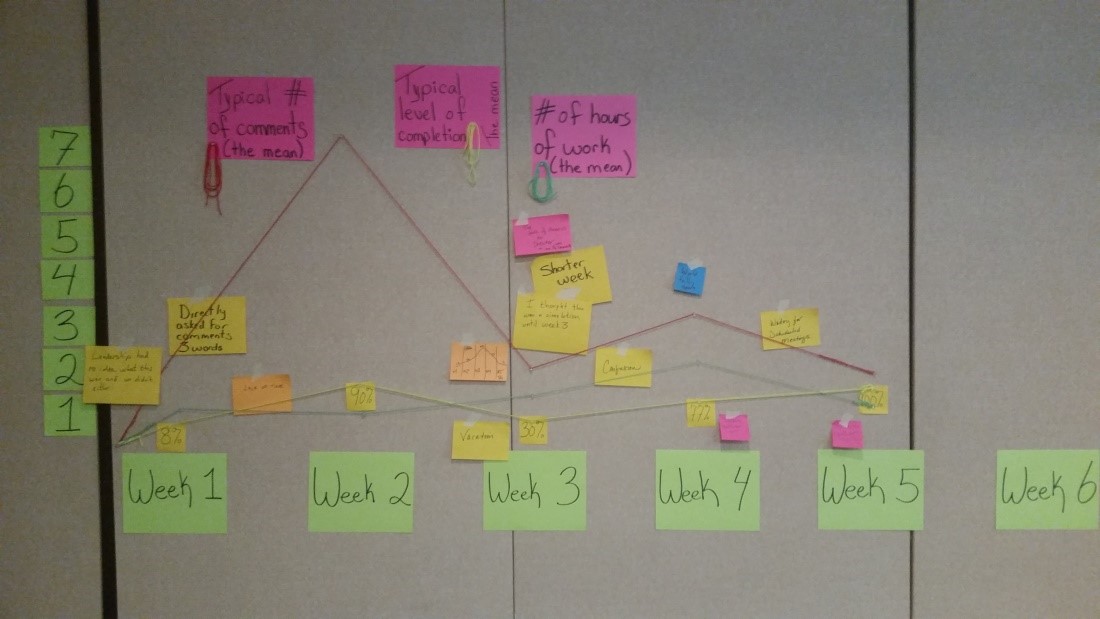 Numbers have a whole world of information beneath them. Making decisions on numbers alone can get you into trouble.

At a recent meeting to evaluate and adapt the pilot of a six-week online course, my colleague Jeanette Romkema and I shared the numbers about level of completion and typical number of comments participants made each week. We used a simple line chart and recreated the chart on the wall using yarn and push pins. One participant suggested we add more data — the amount of time each person dedicated to the course work (both online and on the job). Each team estimated their time and we added a new line to our chart. That led to new comparisons and insights.

The group annotated the chart, filling in what was going on for each person in their work world, and in the course itself.

Some things, we already knew. We knew that Week 3, which had low levels of completion, was a shorter week. We did not know that for some people, that was the week where they invested a much larger amount of time offline, with their agency partners debating the direction they would take.

We knew that the closing face-to-face gathering created a pressure for participants to move through their assignments and be ready to share their work. We did not know that this meant they would minimize their “comment time” and that they did not feel ready to post their assignments online before the meeting.

Participants learned too. They said that some aspects of the work had not been fully explained. As they analyzed their own work in the course, they learned that they really had not done all the reading in the first weeks, and that created more confusion for them than others experienced.

As people described their own experiences, and annotated our wall chart, we ended up standing around the chart, and digging into the story that was emerging. The chart, which started as numbers on a wall, became a much fuller story and provided a rich backdrop to the decisions we took that afternoon.

What techniques do you use to fill in the story around your data?

Christine Little is a Partner and Core Consultant with Global Learning Partners.