Mary Jane “MJ” first came to know about Dialogue Education through a short introductory course taken at the Perspectives on the World Christian Movement conference in Dallas in 2007. Immediately, she enrolled in “Learning to Listen, Learning to Teach” and the “Advanced Dialogue Education” courses. She became a CDEP in 2009. At the same time, she became a volunteer with Wycliffe Associates working in Congo-Brazzaville as a Community Development Specialist. From September 2012 until 2015, MJ was based in Valence, France, working part-time with Wycliffe France and continuing the community development work in Congo. Through this work with Wycliffe Associates, she learned about the “Learning that Lasts” course, took the course and is now an intern teacher of this dialogue education course developed by Roland Walker for use in the language programs of Wycliffe Bible Translators. Her experience with Dialogue Education has ranged from the traditional and online classroom to the developing world. Through an online course with the Chalmers Center for Economic Development, MJ became acquainted with the book called “When Helping Hurts”. Among its many merits, the book emphasizes the need to stop ‘doing for’ people in the developing world and to start ‘doing with’ them. The principles and practices of dialogue education are very effective in working with people to develop their own plans and projects while being respected and valued for what they bring to the process! Her motivational themes are healing, reconciliation and empowerment! Since 2016, MJ is working with the Society of International Linguistics (SIL) as a consultant trainer for another course called “Participatory Methods for Engaging Communities”. MJ participated in launching of this same course in French for the first time in Africa in 2012. Also, since 2016, MJ has been living in Paris, France, fulfilling a lifelong dream. She is the president of a non-profit association called Accorderie de Paris 19. To learn more about this unique association, you can visit the website. http://www.accorderie.fr/paris19/ Since moving to Paris, MJ has become involved in creating museum tours that involve a DE approach to interacting and appreciating art. She leads museum tours regularly, as a volunteer with the Accorderie, at the Louvre and other Paris museums. Before her early retirement in 2005, MJ worked as a civil engineer in the water and wastewater fields for over 25 years. From 2008 until 2012, she held the position of Adjunct Instructor for Water Treatment Operations with the Santa Rosa Junior College in Santa Rosa, California. The course was designed and facilitated online on the Moodle platform using what she learned from the “Dialogue Education Online” course in 2012 to guide and shape the course design. MJ also facilitates a workshop called “Uprooting Buried Lies”, a guided healing prayer process created by Martha Delmon, missionary to France, who also facilitates this workshop in France. MJ hopes to incorporate this workshop into her community development activities in Africa and France. 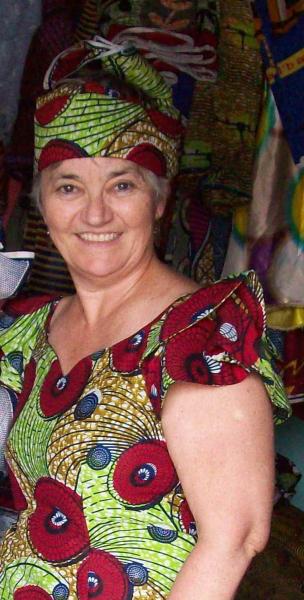