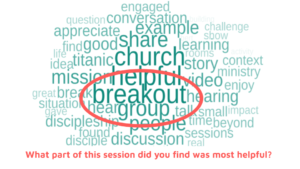 As we reviewed the assessments coming in after the pilot of a newly developed training course, two words stood out: breakout rooms. Half of our team expected the feedback on these virtual discussion groups to be negative, the other wondered why almost every participant wrote about them in their responses.

We pored over the data from 200 participants across the United States and Canada, and an overwhelming majority found the breakout rooms to have been the most helpful element of the course. We were surprised by the feedback, in part because of our personal experiences with ineffective breakout rooms and negative feelings at seeing the click to join breakout room invitation pop up.

Why did we dread joining a breakout room? What made our breakout sessions the most helpful?

When we reflected with others who harbor breakout room phobia, we discovered that participants hesitate to click to join because they are entering a space that lacks direction and facilitation. This is particularly true for leaders. Leaders feel anxiety when confronted with a lack of leadership and their natural response is to step into the leadership gap. When that happens, they are no longer participants.

The feedback we received through the course assessments caused us to evaluate how we were conducting the breakout rooms. Our discoveries fell into three categories: structure, management, and content.

I’ve come to love the moment when screens of smiling participants reappear after the breakout rooms. It assures me something significant happened. Important connections between people do occur in cyberspace. Each person contributed to the learning journey of other participants. Their experiences affirmed, learning advanced, and ownership of the content increased.

So prior to the next time you launch breakout rooms and send the click to join breakout room invitation, apply these observations and participants won’t hesitate.

What tip would you offer to ensure breakout rooms are a hit?

Rev. Elaine May is the Thriving Congregations Curriculum Developer for the Christian Reformed Church in North America.

Here are other GLP offerings you may be interested in: