Women Writing for (a) Change, In a Circle

"A circle of women is a nurturing and sustaining resource that can become a spiritual and psychological wellspring tapped into whenever the circle meets."

A friend tells the story of a time when she was in college. Her male professor asked the class for the qualities of positive leadership. The standard answers came: Focused. Direct. Action-oriented. Authoritative. My friend, on the other hand, suggested that good leaders "allow." The professor thought about it, talked his way around it, and tossed it about, but, in the end, he never actually put the word on the board. In effect, she was silenced. Some 30 years later, it still rankles.

In a world where education, corporate and academic, is often dominated by male voices, where is it safe for women to gather, learn, and express their individual voices? Put another way, how can we create "safe containers" for learning and self expression for women, or anyone, for that matter? Where is it safe to learn?

One answer is: In a circle. 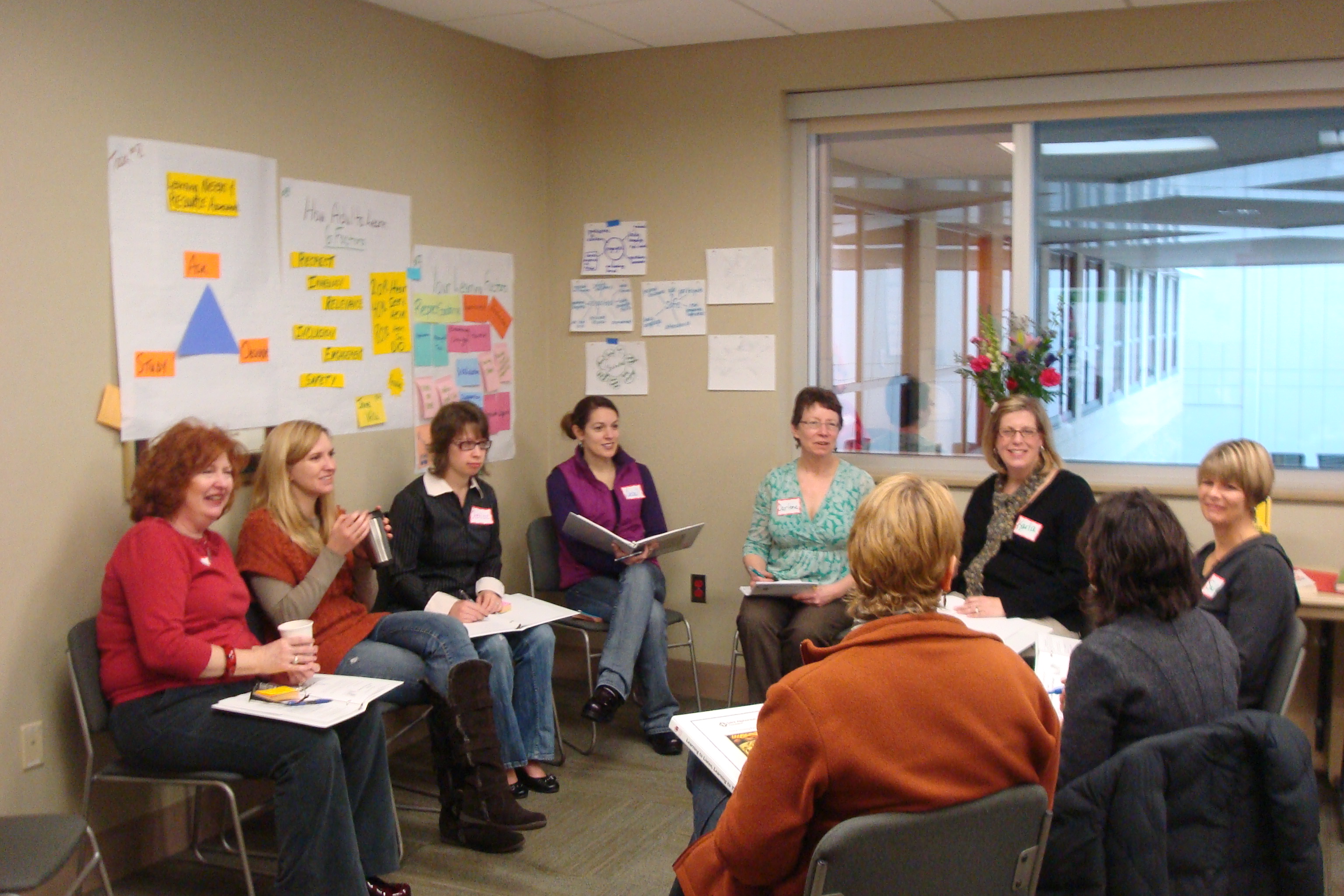 Since ancient times, at least as an archetype, the ritual of sitting around a fire and telling stories has been an effective way for cultures to teach their young, pass on cultural traditions, and make decisions of group conscience. The practice has many benefits. Using a "talking stone," or "talking stick," ensures that each individual is listened to, without interruption. Passing the stone in a circle gives each person a chance to speak and voice an opinion. In a circle, each person is equal to the next.

The rituals incorporated into this group process provide a discipline and a structure that ensures the circle is "held"; that it remains a "safe container." It enables the circle to be nurtured, cultivated, and sustained over time. It also acknowledges a simple truth: in a circle, all are equally important, and all "stories" can be told and heard.

Today's classrooms (and political systems) have typically used a very "masculine” model, emphasizing power, hierarchy, and authority over a more "feminine style" of equality, shared power, and focus on the learning process. One person is usually raised on a dais (the "professor” or "instructor”) and participants are lined up, theater style, and only allowed to speak if they are called upon.

As one example, my aunt often told the story of how, when she was a seminary student at Union Theological Seminary during World War II, her professors regularly refused to call on her. One actually stated that she was taking up a seat where a man should be sitting.

This is how we silence the voice of the feminine.

At Women Writing for (a) Change,  a writing school in Cincinnati with affiliates sites around the country, these "circle practices" are being recreated, honored and ritualized. The circle is viewed as a "container” where the participants are safe to share, and various "care of the container" methods ensure that the circle is maintained in a healthy and self-sustaining way.

The Cincinnati site was started because of the failure of the patriarchal model to hold the capacity to hear women's voices. Founder Mary Pierce Brosmer established the school after she was told, as a high school English and writing teacher, that she could not use what was deemed as "feminist literature" as one of her classroom texts. This was in 1991, just 20-some years ago.

On October 9, 2013, Women Writing for (a) Change, Jacksonville, one of the two newest affiliate sites, completed its first "sample class" for local participants to experience the WWf(a)C methodology. The session was filled with insight, some tears, and wonderful writing. We used the "circle practices" of Women Writing for (a) Change, which are very specific and geared to create a safe place of expression.

This model is useful not only for women, but also for all learning experiences. Some of the key practices are:

This practice, which Brosmer also calls "Conscious Feminine Leadership," represents an opportunity to shift our learning culture from rigid rules and hierarchy to a more flexible, choice-oriented, respectful system that allows women — or anyone — to speak their truth.

The awe with which the Jacksonville participants held the process is reflected in the "Soul Cards" they wrote at the end of the two-hour session:

Jean Shinoda Bolen wrote the book, The Millionth Circle, to encourage women to create more "circles" until we reach a point where the old system no longer holds power, and the new way — which is a very old way — rises up. Women Writing for (a) Change, Jacksonville, is one of those million circles. Perhaps there are lessons here that the Global Learning Community might find valuable and aligned with their own learning practices, as we create new circles and shift to a new era of more consciously feminine learning and leadership.